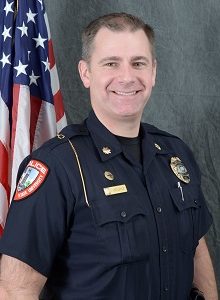 Major Kendrick started his law enforcement career with the Rocky Mount (NC) Police Department in April 1998. He worked there as a patrol officer, field training officer, narcotics corporal and SWAT Team member until September 2006 when he came to the NC State University Police Department.

Since coming to the NCSU Police Department, Ian has functioned as a Patrol Sergeant, Patrol Captain and Special Events Coordinator. In 2017, Ian was promoted to his current rank and currently oversees the Support Services Division. He graduated from Western Carolina University in 1996 with a degree in Political Science and recently attained his Certified Sports Security Professional (CSSP) from the University of Southern Mississippi.

Ian is an active member of the Raleigh Police Memorial Foundation and Law Enforcement United.